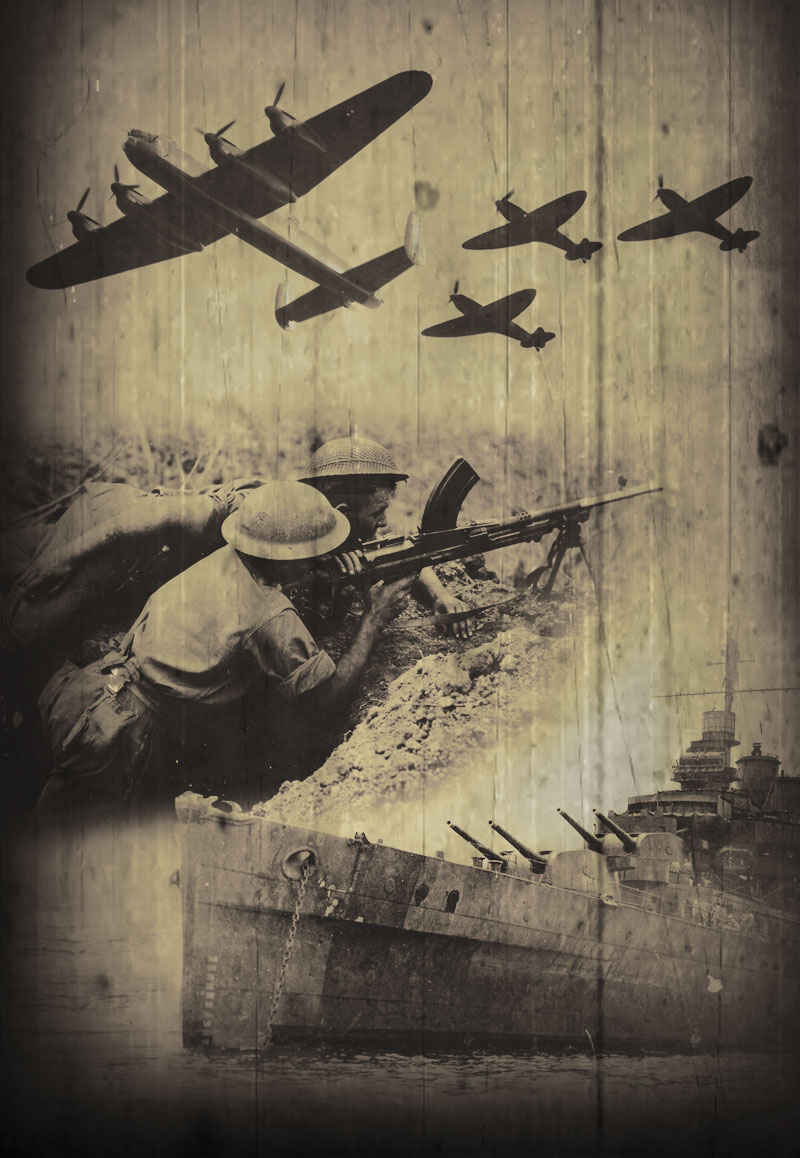 Victory in the Pacific Day marks Japan's unconditional surrender to the Allies after more than 3 years of war. It's a special time for us to reflect on the important role that Australians played to end the war in the Pacific region. VP Day 2020 will be the commemorated as the 75th anniversary of the end of World War II.

This stunning series of second world war collectables remembers the almost one million Australian men and women who served in the Second World War between 1939 and 1945 - in Europe, the Mediterranean and North Africa; and then in the Asia-Pacific.

The 'War in Europe' ended with Germany's surrender on 7 May 1945. Japan's surrender came on 14 August 1945. The names of the almost 40,000 men and women who died in, or as a result of this war will live forever on our National Roll of Honour.

REMEMBER YOUR FAMILY THAT SERVED 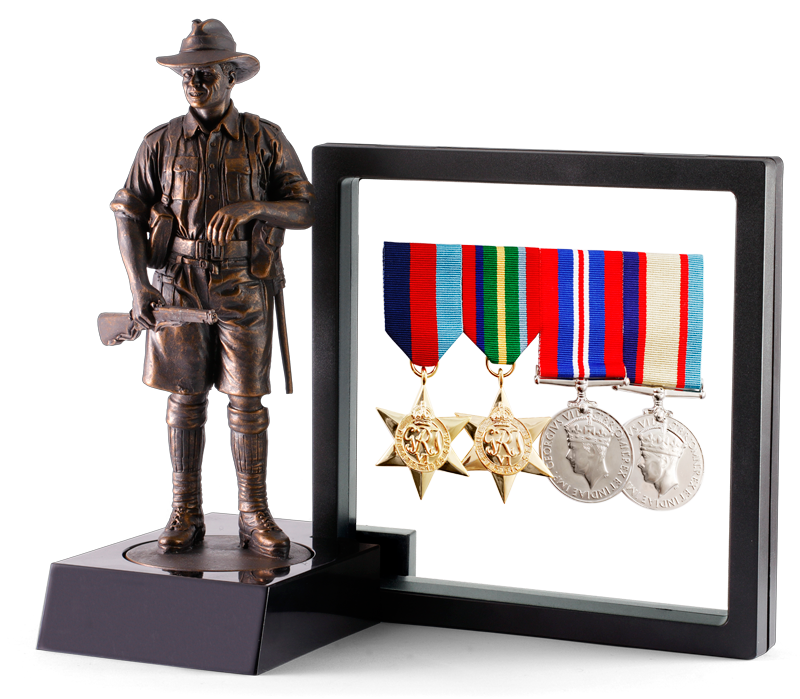 This exceptional World War II Digger miniature figurine, with frame and stand included, is the perfect way to display a legacy of service. From pictures to medals, the 3D frame can showcase a generation of achievements proudly.

From 1942 onward, Australian troops played a decisive role in the Pacific theatre in an attempt to halt Japanese expansion in the region.

The medals awarded to those who served varied depending on the contribution made by each individual’s specific service.

We have hand crafted the most common medals of the period into groups awarded for service. Each group with its own history and significance.

These medal groups are available and ready for dispatch. 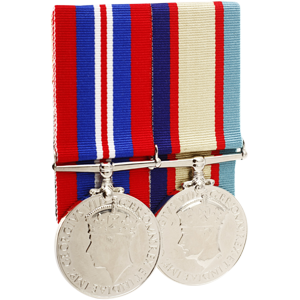 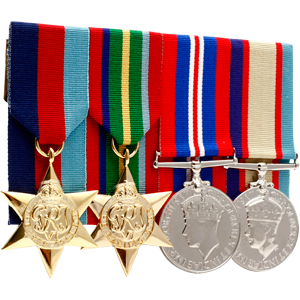 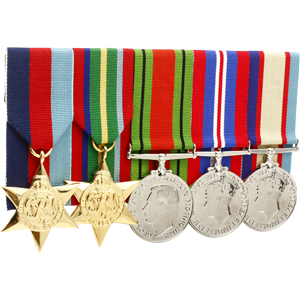 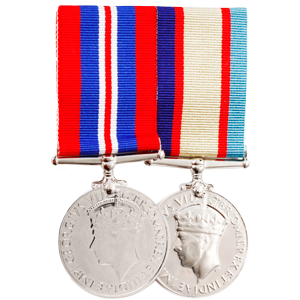 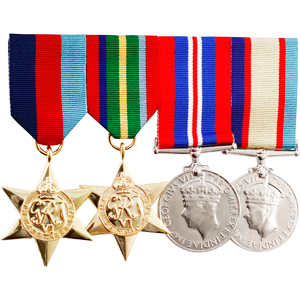 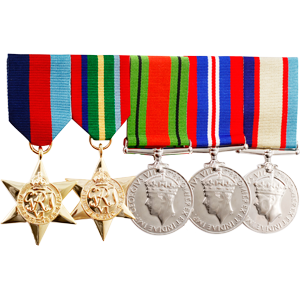 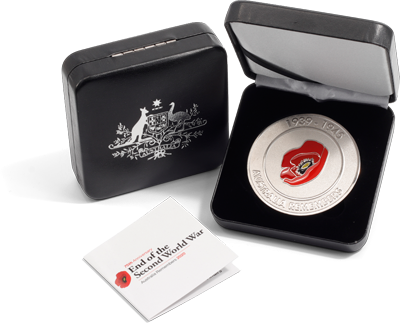 The Department of Veterans Affairs has created a special commemorative medallion marking the 75th anniversary of the end of the Second World War which is now available to every living Second World War veteran to say ‘thank you for your service’. Find out more. 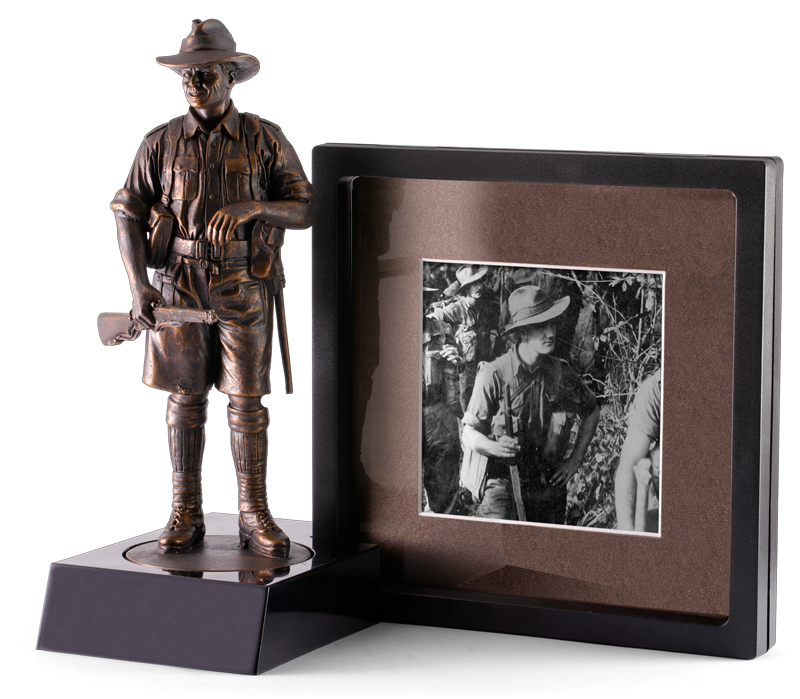 This exceptional World War II Digger miniature figurine, with frame and stand included, is the perfect way to display a legacy of service. From pictures to medals, the 3D frame can showcase a generation of achievements proudly.

This poignant range commemorates the end of the war in the Pacific after the surrender of Japan and captures the jubilation of the country. 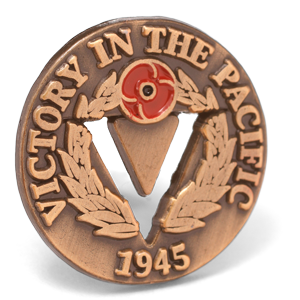 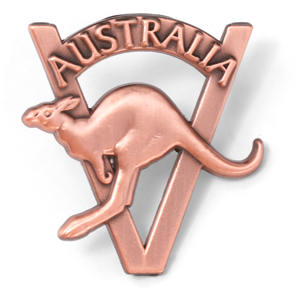 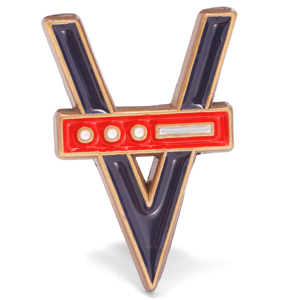 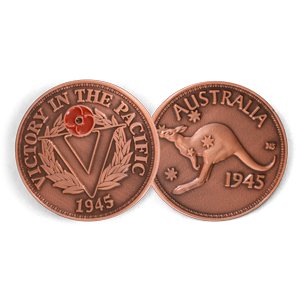 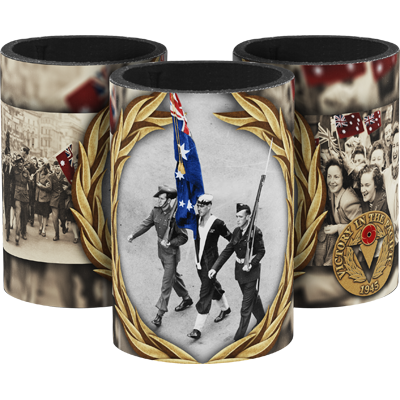 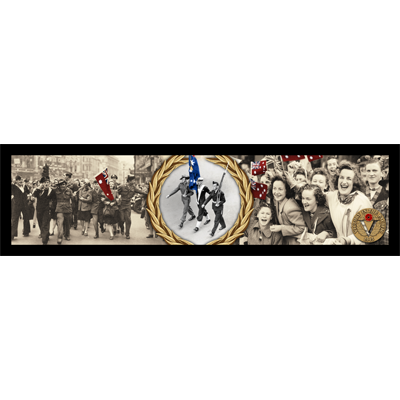 These stunning figurines depict a typical Australian infantryman in the Pacific theatre with his trusted SMLE rifle. His left arm rests on a large ammunition pouch that formed part of the basic 1937 pattern webbing, which also carried a bayonet and water bottle.

The Memory of Sandakan - Borneo 1945 Figurine

The brutal honesty of this figurine remembers Sandakan prisoner of war camp in Borneo and honours the memory of the Australian and British who suffered there. For people of all nations who lost loved ones and family to the cruelty of Japanese camps in the Second World War, it stands as a promise that we will remember the truth always. 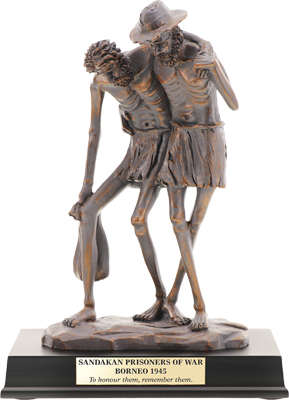 Designed to commemorate and honour the men and women who selflessly served our country during the Second World War.

Find out more about the Allied Victory

The first ever series of WW2 1942 Limited Edition Medallions is now available. Each element of the landmark Second World War 1942 collection is captured in these proof quality medallions; from the fall of Singapore in January to the victory at El Alamein in November. 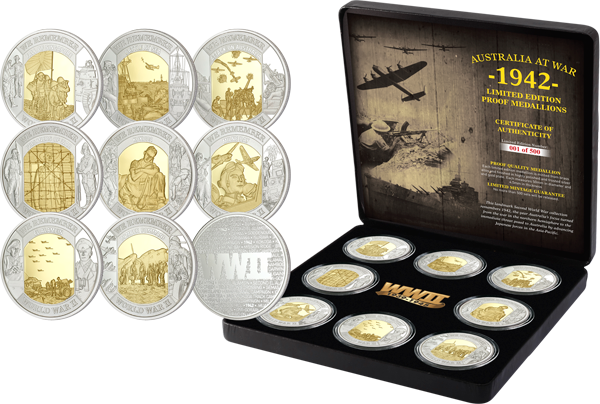 VIEW AND ORDER INDIVIDUAL MEDALLIONS OF THE KEY EVENTS OF 1942

Remember the war years and share with pride the memory of all who served. Stunning designs that convey history and honour.

This landmark series remembers 1942, the year Australia's focus turned from the war in the northern hemisphere to the immediate threat posed to Australia by advancing Japanese forces in the Asia-Pacific. An insightful collection to tell Australia's story in 1942. Historic details included with each piece.

Japan's relentless air and sea campaign against Australian communities and shipping began with a massive air raid against Darwin on 19 February 1942. Attacks on mainland Australia continued till late 1943. 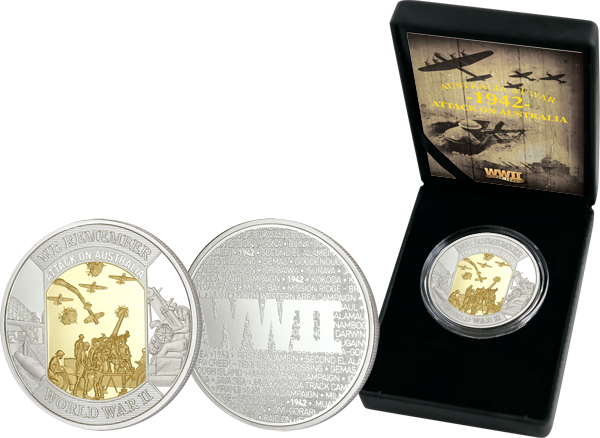 The fall of Britain's "Gibraltar of Asia" on 15 February 1942 had a profound effect on Australia. Some 15,000 Australians were captured, and the loss of Britain's air and sea bases opened the door to Australia for the advancing Japanese. 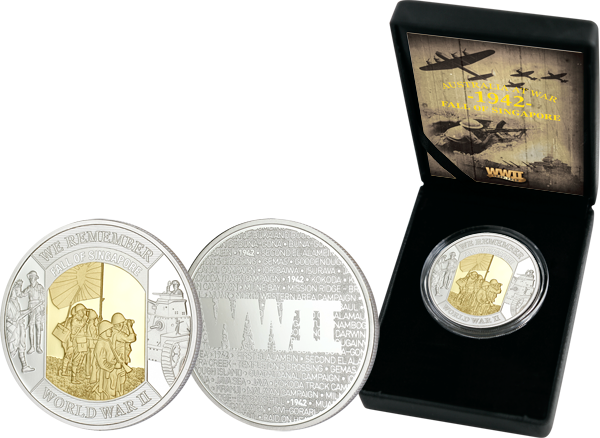 More than 30,000 Australians were taken prisoner during WW2. Some 22,000 were captured in 1942 by the Japanese and while all prisoners endured hardship, the treatment of POWs in Japanese camps and during construction of the Thai Burma Railway remains one of the darkest periods in Australian military history. 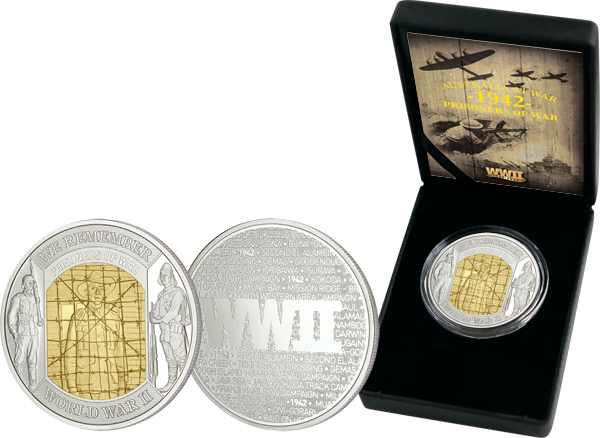 Some 10,000 Royal Australian Air Force aircrew served over Europe with RAF Bomber Command between 1939-1945. Of all Australians lost in the Second World War more than one in ten served with Bomber Command. 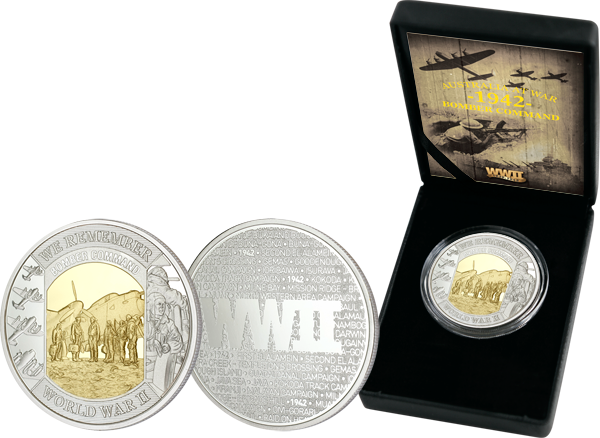 Australian ground and air forces played an important role in the victory at El Alamein in November 1942. The defeat of the "Desert Fox" Field Marshal Erwin Rommel was the first major allied success of the war. 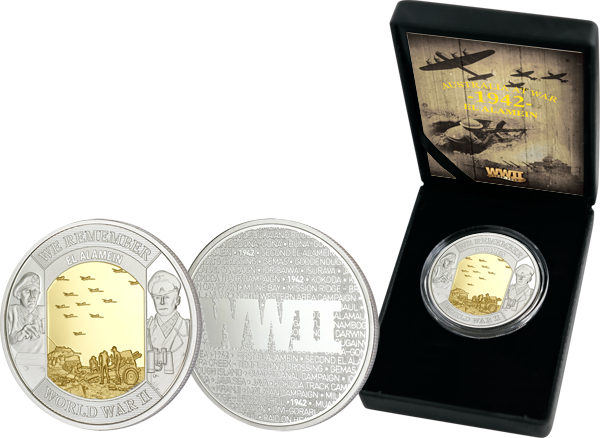 Australia's victory against Japan at Kokoda in 1942 was one of the most significant battles in the Asia-Pacific War. It was the final blow to Japan's ambitions to capture Port Moresby and denied Japan a foothold on Australia's doorstep. 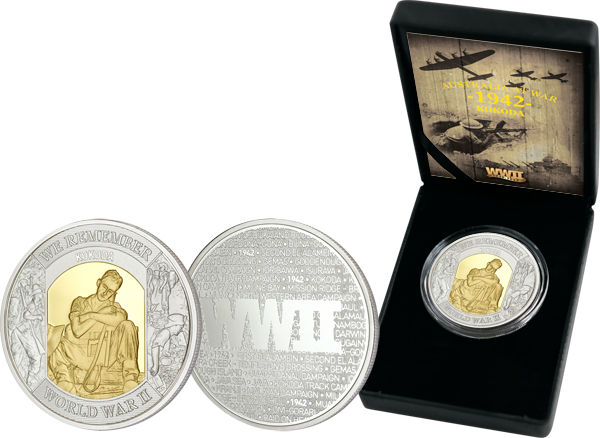 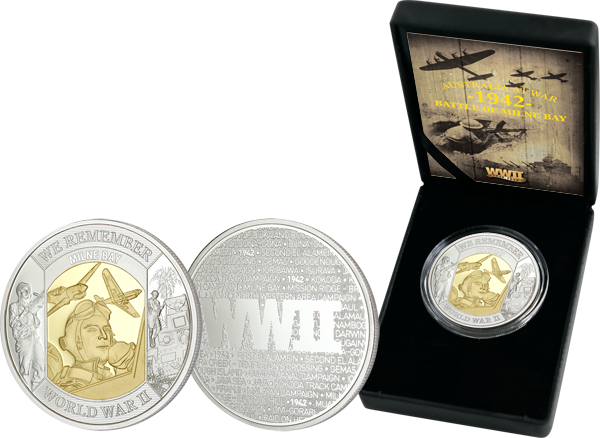 Battle on the Seas

The first year of the War in the Pacific was costly for the Royal Australian Navy. Four of five major R.A.N. ships sunk in 1942 were lost to the Pacific War, including HMAS Canberra, Australia's biggest warship lost in combat. 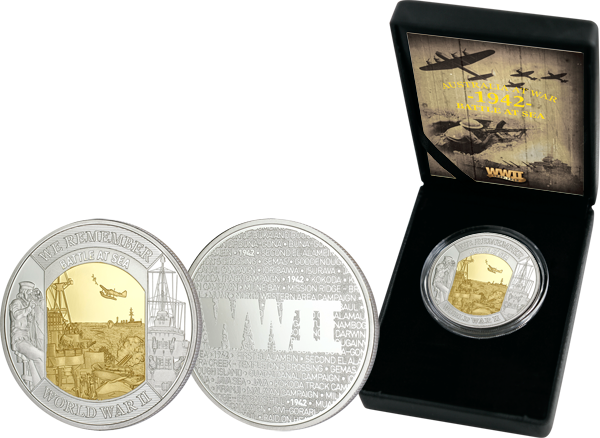